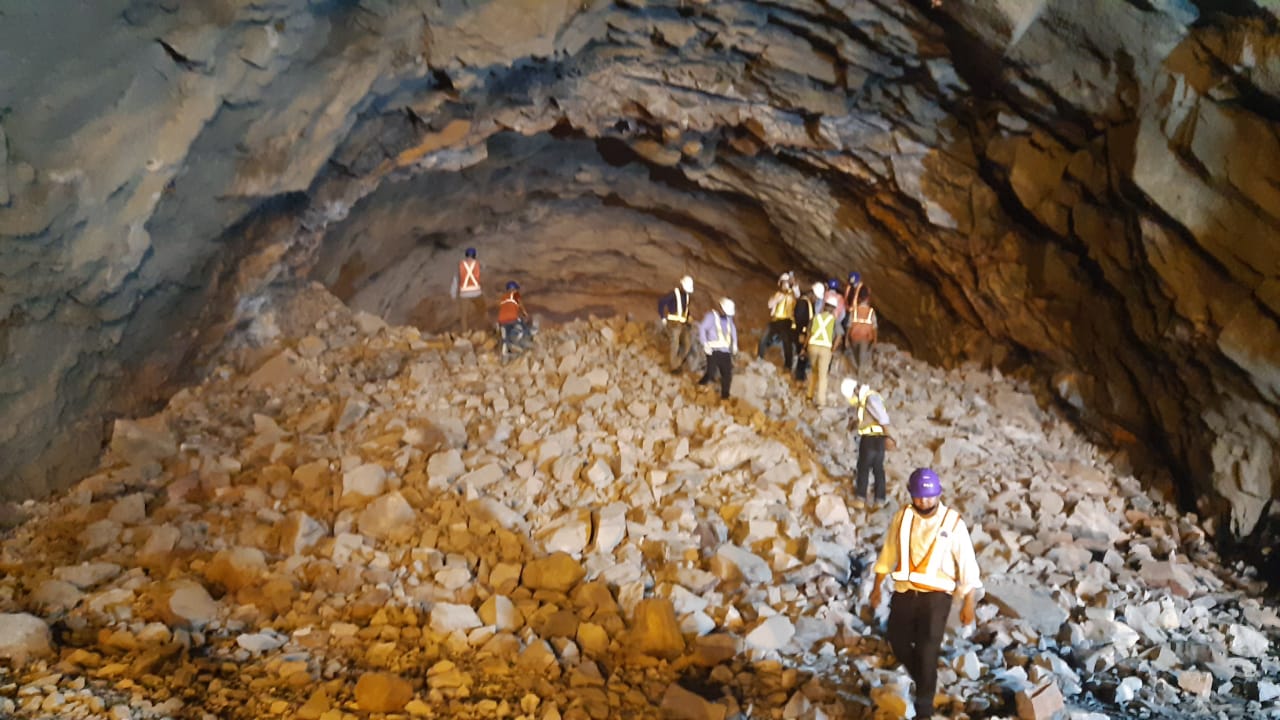 This work of tunnel has been completed in record less than a year time. Work started on this site in 2019.

Geologically this tunnel is safe and stable as it is caved through 2500 to 500 million year old Proterozoic Rocks mainly Quartzite, Schists and slates of Alwar/Azabgarh groups of Delhi Supergroup rocks which have high bearing capacity

Double stack containers and 25 ton axle load freight trains will run through this tunnel at a speed of 100 KMPH.

DFCCIL has completed the ‘Tunnel Breaking Ceremony’ which marks the completion of tunnel caving work of the 1 km long tunnel of its Western Dedicated Freight Corridor through the Aravalli mountain range, near Sohna in Haryana today in record less than a year time. The last blasting of the tunnel which is situated on the Rewari-Dadri section has been done today dated 24/07/2020.
The tunnel connects Mewat & Gurugram district of Haryana and negotiates a steep gradient on the uphill and downhill slope of the Aravalli range. The D-shaped tunnel has a cross-sectional area of 150 square metres to accommodate double line with higher OHE (Over Head Equipment) to enable double stack container movement on WDFC. Cross-sectional area wise, it is one of the biggest Railway tunnels in India. One end of the tunnel is near Rewari and is called Portal -1 or west portal while the other end of the tunnel at Dadri is designated as Portal -2 or east portal. Double line electrified track for double stacks train movement, the Dimension of tunnel 14.5 meter and 10.5 meter height in straight portion and 15 meter wide and 12.5 mtr. Height meter to provide extra clearance while negotiating the curve.
Geologically this tunnel safe and stable as it is caved through 2500 to 500 million year-old Proterozoic Rocks mainly Quartzite,Schists and slates of Alwar/Azabgarh group, part of Delhi Supergroup of rocks which are having good strength high bearing capacity.

These Quartzite rocks are hard and suitable for constructing tunnels. The drainage of water is achieved through side drains. Ballasted track is laid inside the Tunnel to facilitate fast and safe train movement. The contact wire, catenary and dropper assembly of OHE shall be attached to the ceiling of tunnel while S&T cables, feeder wire will be supported through tunnel wall through cable trays.
Tunneling work has been done systematically and in a planned manner from both the ends by deploying high tech man & machinery. This is the reason behind completing the caving work in a record one year time. The high-tech machinery used were: Boomer Double arm type with arm reach spanning 7 metres(2 Nos), Shotcrete Machine Robotic Arm type with a reach of 12 metres (2 Nos.), Transit Mixer having 6CUM Capacity (5 Nos.), Hywawith a Load capacity of 20 Tons (10 Nos), Scissor Lift (1 No), DG Set of 500 KVA capacity (3 Nos.), Concrete Pumps (2 Nos.), Grout Pumps & ROC.

There are a total of six tunnels in both the Eastern and Western Dedicated Freight Corridors.In WDFC there are the 1 km long Sohna Tunnel, the 320 Metre long Vasai Detour North Tunnel and the 430 Metre long Vasai Detour South Tunnel. Likewise, the EDFC also has 3 tunnels measuring 150 Metre, 475 Metre and 300 Metre respectively in the SonnagarGomoh Section.

DFCCIL has run more than 1600 trains in the Bhadan-Khurja section of EDFC and the Madar-Rewari section of WDFC till date. Despite the Coronavirus pandemic situation, work is progressing at a fast and resolute pace in DFCCIL. The Eastern (excluding the PPP section) and Western DFC is slated for completion in June 2022.