The 13th Conference of Parties (COP) of the Convention on the Conservation of Migratory Species of Wild Animals (CMS), an environmental treaty under the aegis of United Nations Environment Programme, is going to be hosted by India during 17th to 22nd February 2020 at Gandhinagar in Gujarat. This was announced by Union Minister for Environment, Forest and Climate Change, Prakash Javadekar at a press conference in New Delhi today. 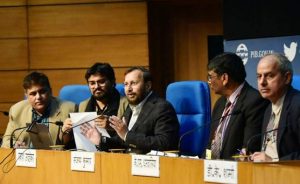 As the host, India shall be designated the President for the next three years.The Government of India is Signatory to the Convention on Conservation of Migratory wild Animals (CMS) since 1983. The Government of India has been taking necessary actions to protect and conserve migratory marine species. Seven species that include Dugong, Whale Shark, Marine Turtle (two species), have been identified for preparation of Conservation and Recovery Action Plan.

“Hosting CMS COP-13 is a significant step towards wildlife conservation in India. Prime Minister Narendra Modi will inaugurate the opening of the CMS COP13 on Monday, 17 February 2020; representatives from 130 countries, eminent conservationists and international NGOs working in the field of wildlife conservation will be attending the COP”, said the Union Environment Minister.

On 15th and 16th February, Pre-COP meetings will take place including the Stakeholder Dialogue, High-Level Segment Meeting and the Champion Night Award Ceremony. The Opening Ceremony and Plenary session of the COP will take place on 17th February followed by Side Events and Working Group meetings till the Closing Ceremony on 22nd February. Simultaneously, numerous national and international organizations will showcase best practices in wildlife conservation in the exhibition area.

The theme of CMS COP13 in India is, “Migratory species connect the planet and we welcome them home. “The CMS COP 13 logo is inspired by ‘Kolam’, a traditional artform from southern India. In the logo of CMS COP-13, Kolam art form is used to depict key migratory species in India like Amur falcon, humpback whale and marine turtles.

The mascot for CMS COP13, “Gibi – The Great Indian Bustard” is a critically endangered species which has been accorded the highest protection status under the Wildlife Protection Act, 1972.The Indian sub-continent is also part of the major bird flyway network, i.e, the Central Asian Flyway (CAF) that covers areas between the Arctic and Indian Oceans, and covers at least 279 populations of 182 migratory water bird species, including 29 globally threatened species. 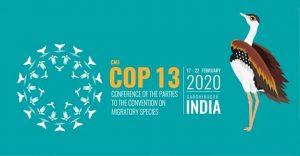 As the host, India shall be designated as the Presidency during the intersessional period following the meeting. The COP Presidency is tasked to provide political leadership and facilitate positive outcomes that further advance the objectives of the Convention, including steering efforts towards implementing the Resolutions and Decisions adopted by the Conference of Parties.

Migratory species of wild animals move from one habitat to another during different times of the year, due to various factors such as food, sunlight, temperature, climate, etc. The movement between habitats, can sometimes exceed thousands of kilometers/miles for some migratory birds and mammals. A migratory route will typically have nesting sites, breeding sites, availability of preferred food and requires the availability of suitable habitat before and after each migration.